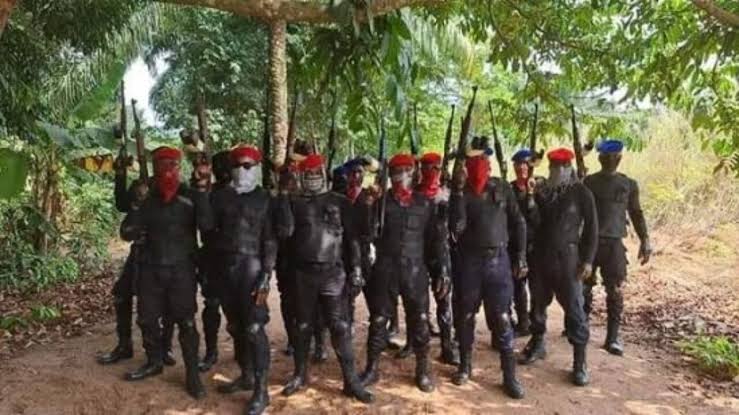 The Unmasking of the Unknown Gunmen By Amby Uneze KSJI

The popularization of the term "unknown gunmen" started in Imo State after the military were invited to Orlu in the wake of alleged fighting between security forces and the Eastern Security Network of the Indigenous People of Biafra (IPOB). Before the invitation of the Nigerian military to that area by the State actors, Imo State was generally peaceful and there was no bloodletting which is now the order of the day.

We recall that from 2011 to 2019, eight solid years of former governor Rochas Okorocha's administration, there was relative peace. Though, the IPOB would as usual issue her threat to have a Biafra nation, but the government at the time would parley with them hence we had a peaceful Imo. Outside the stray bullet that killed the young and innocent Somtochukwu during the crisis created in the wake of the demolition of Eke-ukwu Owerri ancestral market, there was no other known government involved in the killing in the State.

Ditto to the seven month-old administration of Rt. Hon. Emeka Ihedioha, who held sway as the governor of the State, Imo enjoyed absolute peace. The youths of the State were virtually part of the government, the same goes to women and indeed every Imolite was involved in moving the State forward, until the unexpected happened on the 14th of January, 2020 when that glorious regime was removed by the Supreme Court.

Going down memory lane, the claim that Imo State used to be the most peaceful State of the Federation was true. It won accolades for this great feat. Prior to the present administration it was the tourist destination of the other States in the country. Residents of the neighbouring States such as Rivers, Bayelsa, Enugu,etc used to spend their weekends in Owerri, the capital. There was nightlife and the hotel rooms used to be booked in advance. The economy of the State was also flourishing. In fact, the people were always in a happy mood. In fact, that is the Imo of our collective dream.

When the security threat of the South East began, as a result of the increasing activities of the Fulani Herdsmen in all parts of the country, some regions initiated internal security mechanisms to checkmate the actions of these marauders. By then these Fulani Herdsmen had taken over all the forests and bushes in the Southern parts of the country with flimsy excuses of grazing their cattle. Unfortunately, they turned the forests into a kidnapping den. They kidnapped, killed, raped, and carried all sorts of illegal acts in the forest.

The first geopolitical zone to take the bold step was the South West. They overcame all odds to establish their own kind of security outfit “Amotekun”. This security outfit has been fruitful in that region because all the States House of Assembly in the South West were involved and they passed the bill which became an act of the parliament.

The South East wanted to emulate the success story of the South West in setting up the Amotekun, but theirs was politicized. Governor Hope Uzodimma first broke the news when the Correspondents’ Chapel of the Imo State chapter of the Nigerian Union of Journalists (NUJ) paid him a courtesy visit that the South East was planning to set up a security outfit to checkmate the illegal activities of the Herdsmen in our region. He announced that the security outfit would be unveiled after a security summit that would take place in Owerri very soon.

The governor was quoted as saying that before now, the Eastern Security Network (ESN) was the brainchild of the South East governors until it was hijacked by the Indigenous Peoples of Biafra (IPOB) and bastardized the name and “we have to change it”.

According to the governor, it is necessary for each geopolitical zone to now manage her own security. It is true that the South East and Ohanaeze Ndigbo tried to set up Eastern Security Network and before we could come out with something, IPOB hijacked the name and started messing up with it.

“Very soon we will come up with a name and we will not allow any external evasion or allow anybody to take us to ransom. There is no failure in government as its primary aim is to protect lives and property. Very soon a security summit will be hosted in Owerri and something meaningful will come out to complement conventional security agencies”, he said.

However, on April 11, 2021 in Owerri, there was a South East security summit attended by the five governors of the region, the Ohanaeze Ndigbo worldwide, top security chiefs and the leadership of religious groups where a security outfit “Ebubeagu” was formed.

Part of the communique reached at the summit included: to strongly and unequivocally condemn terrorism and banditry in any part of Nigeria, particularly in the South East. The meeting strongly condemns the burning of police stations, violent attacks on custodial centres with the unlawful release of inmates, and the killings including security personnel, natives/ farmers and headsmen.
*That the political leadership in the South East has resolved to bring together all the arsenals at their command, as one united zone, to fight and flush out criminals and terrorist from the zone.

*That the summit resolved that to achieve this, there is a need to galvanise all the relevant stakeholders in the south east, the political class, the business community, the bureaucrats and the intelligentsia to provide all necessary support to security operatives in the five south east states to ensure total success in the fight against criminality in the zone.

*That to fast track crime-busting in the south east, the heads of security agencies have been mandated to draw up a comprehensive list of their logistics and material needs for sustainable success in the fight against criminality, for the immediate provision by the leadership of the South East.

*That a committee made up of security personnel, government officials and relevant stakeholders be set up to coordinate and monitor the implementation of the south east joint security platform.

*To applaud the initiative of the South east security summit and to make it a statutory summit that will convene every quarter while its hosting shall rotate among the five south east states. The meeting appreciated the formation of South East joint security outfit code named Ebubeagu with headquarters in Enugu to coordinate it.

Having done this on papers, the questions now remain why they could not follow the steps adopted by their South West counterparts? Did the States House of Assembly in the five States of the region pass the legislation to monitor it? Who and who appointed the coordinators and members of the Ebubeagu security outfit? How many States have adopted and implemented the resolution? Are the Ebubeagu members, the unknown gunmen operating in Ebonyi and Imo States?

The above questions became pertinent considering the activities of the so-called Ebubeagu security outfit in Imo State. The element of 5Ws and H: who, when, where, what, why and how this organization which is now dreaded in the State was formed has become the concern of everybody. Their activities are no longer to protect lives and property of the citizens of the State but are allegedly seen as an agent to kill, maim, harass and intimate the people.

Recent ugly events in parts of the State such as the cool-blooded killing of about 21wedding guests in Awo-Omamma in Oru West local government, killing of a young man in Oguta in Oguta local government, and the murder of another seven people in Orogwe in Owerri West local government and other killings in the Orlu area are allegedly pointed towards the Ebubeagu. Therefore, the activities of the said Ebubeagu security outfit no doubt brings to the conclusion that they are the brain behind the unknown gunmen which ravaged the State last year.

It, therefore, behooves on the chief security officer of the State, Governor Hope Uzodimma to put a stop to these careless killings by unbanning the Ebubeagu security outfit and in its place set up community vigilante groups in collaboration with traditional rulers and town union leaders. Its membership should be drawn from active and able-bodied men with proven track records of good character and conduct. People with questionable means of livelihood should not be members of the proposed community vigilante.